Highlights and Things to Do in Cartagena Colombia

You are here: Home / Travel / Americas / South America / Highlights and Things to Do in Cartagena Colombia

Cartagena Colombia is a city with a sordid and colourful history, from the pre-Colombian settlement to the Spanish conquistadors who capitalised on the gold, silver, and slave trade thus attracting pirates. While the forts and tall city walls built to protect the city remain, architecturally, it is the Spanish colonial houses with flower-covered balconies that captured my attention as images of the movie Romancing the Stone flashed through my head.

We had a wish list of top sites and hired a private driver at the port, as our visit to Colombia was a stop on our way to cruise through the Panama Canal. Our driver’s command of English was good, but not great. His slow, deliberate manner, mixed with my basic understanding of Spanish made him a fairly good choice.

Our driver made a point that Cartagena is safe and the drug cartels are located in the capital – Bogata as well as in Calle and Medellin. Then he turned a corner, and, pointing out the window, he identified Pablo Escobar’s old house, giggling as he added he now lives in a much smaller space – in the cemetery.

Safety is a relative scale. When in South America we try not to draw too much attention to ourselves. We never wear expensive looking jewellery or carry a large camera around our necks. In most cities, including Cartagena, I have my Olympus OMD Em5, but I keep it in the bag except when I am taking photos. To date, we have been in six South American countries without any trouble. Check out our basic safety guidelines here.

If you worry about safety, you might want to get a tour. Local guides tend to know how to stay safe.

Powered by GetYourGuide. Become a partner.

Things to do in Cartagena Colombia

Cartagena is an eclectic mix of contemporary and old. We spent the majority of our time in the old town Cartagena often looking out at the modern city. We started at the Pasta Rillo fort wall. A row of cannons protect the old city. The best way to share the top things to do in Cartagena is in photos:

Don’t Forget to Get a Colombian Coffee!

Of course, we stopped for some Colombian coffee in Plaza Santo Domingo. Here, we also found the bronze “La Gordita” (the Fat Lady) statue. Her “shiny bits” are those that are most often touched by those passing by. The statue was a gift to the city in 2000.

If You Arrived Via a Cruise to Cartagena Colombia

Read Next: 25 Tips for Cruising that Everyone Should Know 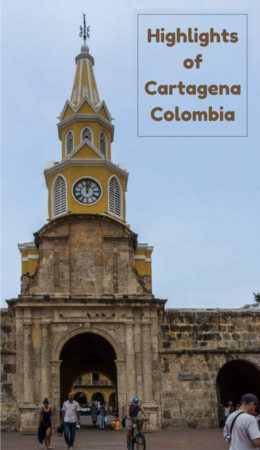 Have you been to Cartagena? Is this how you imagined the city?

Cartagena Port Oasis: See the Wildlife When You Cruise to Colombia
Next Post: Photo Tour: Crossing the Panama Canal on the Island Princess

Quick Reference Links:
- Booking.com
- RentalCars.com
- Amazon.com
474shares
We use cookies to ensure that we give you the best experience on our website. If you continue to use this site we will assume that you are happy with it.OkRead more