You are here: Home / Travel / Americas / North America / Highlights of Chicago in a Day

Highlights of Chicago in a Day

Chicago is one of my favorite cities to visit, as well as being my city of birth. Loaded with fascinating things to see and do, it is impossible to see all the highlights of Chicago in a day. Unfortunately, that was all we had, so we made some hard choices.

Dividing the city geographically, we opted for Chicago’s key downtown locations over the museums, as we have visited them before. Both are presented below. We began our day in the western suburbs and took the Metra train into Union Station.

Option 1 – Downtown Chicago in a Day

Our carefully planned route allowed us to hit what I believe are the downtown highlights of Chicago:

Formerly the Sears Tower, it was once the world’s tallest building. It is now the second tallest in the USA. The views from the Skydeck on the 103 floor can include four states. However, it is the glass ledge that really got my heart pumping.

Read Next: Skydeck Chicago: I Walked Out on the Ledge – Would You?

Considered to be one of the world’s best art museums, this not to be missed museum is loaded with famous works. Most noted as housing the world’s second largest collection of impressionists work, the museum actually has over 300,000 works from Byzantine to modern art.

Chicago is famous for an eclectic mix of architectural styles including being the birthplace of the American skyscraper. There is no better way to see the variety of architecture than from the Chicago River. The best of the cruise options appears to be the Architecture Foundation (CAF) River Cruise aboard Chicago’s First Lady Cruises.

Read Next: Chicago Architecture: Enjoyed from the River

This huge reflective sculpture in Millennium Park is the current number one tourist attraction in Chicago. The best part – it’s free.

If you ask me, I will insist that the world’s best pizza is a stuffed mushroom and spinach pizza from Giordano’s. Honestly, I was so excited to have my favorite pizza that we gobbled it up before I remembered that I wanted a photo. The empty pie plate just wasn’t so attractive.

Chicago in a Day Option 2 – Take a Tour

If you have two days, or if you prefer museums, my other favorite highlight of Chicago is Museum Row. Located a few miles away from the places we visited on this trip, the first three museums listed here are within walking distance of each other:

Located in the midwest region of the United States, Chicago is a great base city for US exploration.

What do you consider to be the highlights of Chicago? Did you spot the problem with the globe? 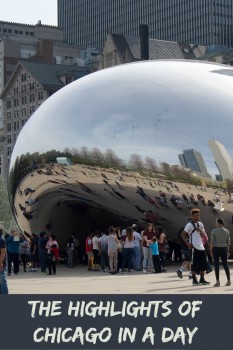 Disclaimer: I was provided with a complimentary entry on several locations in Chicago to aid in the writing of this page. However, the opinions expressed here are strictly my own.

This website uses cookies to improve your experience while you navigate through the website. Out of these, the cookies that are categorized as necessary are stored on your browser as they are essential for the working of basic functionalities of the website. We also use third-party cookies that help us analyze and understand how you use this website. These cookies will be stored in your browser only with your consent. You also have the option to opt-out of these cookies. But opting out of some of these cookies may affect your browsing experience.
Necessary Always Enabled
Necessary cookies are absolutely essential for the website to function properly. These cookies ensure basic functionalities and security features of the website, anonymously.
Functional
Functional cookies help to perform certain functionalities like sharing the content of the website on social media platforms, collect feedbacks, and other third-party features.
Performance
Performance cookies are used to understand and analyze the key performance indexes of the website which helps in delivering a better user experience for the visitors.
Analytics
Analytical cookies are used to understand how visitors interact with the website. These cookies help provide information on metrics the number of visitors, bounce rate, traffic source, etc.
Advertisement
Advertisement cookies are used to provide visitors with relevant ads and marketing campaigns. These cookies track visitors across websites and collect information to provide customized ads.
Others
Other uncategorized cookies are those that are being analyzed and have not been classified into a category as yet.
SAVE & ACCEPT
740 shares