The Radiance of the Sea dropped anchor in Yorkey’s Knob, just north of Cairns. There are so many opportunities here. The ship offered options of rainforest tours, trains, markets and of course, the Great Barrier Reef. We made the choice to spend the day with good friends who live here.

Similar to our last port (Brisbane), the ship was too big to dock close to town. We anchored off of Yorkey’s Knob, a town to the north of Cairns and were transported to shore via tender. The rainy, cloudy morning cast shadows over the hills creating an ethereal illusion.

Our friends picked us up outside the Yorkey’s Knob boat club and rather than taking us to Cairns, they took us up into the Tablelands. It’s an area known to locals as a highland getaway destination. With cooler temperatures and frequent swimming holes, it is a paradise amidst this tropical Australian Queensland destination.

Returning to the Cruise Ship

Don’t Miss: 25 Tips for Cruising Everyone Should Know

Our next port: Darwin

Have you been to the Tablelands, to Cairns, or to the Great Barrier Reef? 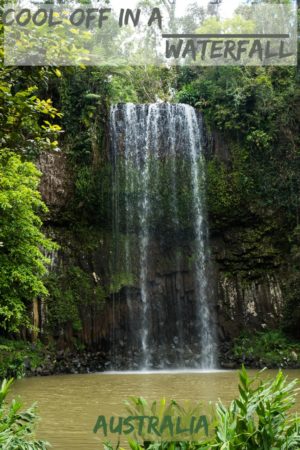 Disclaimer: In addition to VIP treatment onboard the Radiance of the Seas we were provided with many complimentary extras. The opinions expressed here are strictly my own.

This website uses cookies to improve your experience while you navigate through the website. Out of these, the cookies that are categorized as necessary are stored on your browser as they are essential for the working of basic functionalities of the website. We also use third-party cookies that help us analyze and understand how you use this website. These cookies will be stored in your browser only with your consent. You also have the option to opt-out of these cookies. But opting out of some of these cookies may affect your browsing experience.
Necessary Always Enabled
Necessary cookies are absolutely essential for the website to function properly. These cookies ensure basic functionalities and security features of the website, anonymously.
Functional
Functional cookies help to perform certain functionalities like sharing the content of the website on social media platforms, collect feedbacks, and other third-party features.
Performance
Performance cookies are used to understand and analyze the key performance indexes of the website which helps in delivering a better user experience for the visitors.
Analytics
Analytical cookies are used to understand how visitors interact with the website. These cookies help provide information on metrics the number of visitors, bounce rate, traffic source, etc.
Advertisement
Advertisement cookies are used to provide visitors with relevant ads and marketing campaigns. These cookies track visitors across websites and collect information to provide customized ads.
Others
Other uncategorized cookies are those that are being analyzed and have not been classified into a category as yet.
SAVE & ACCEPT
378 shares