With a teen and tween in tow, we couldn’t visit the UK without seeking out Harry Potter Attractions in England and Scotland. We allocated about a week to see London, the classic destinations as well as finding Harry Potter sights in London.  It’s an ambitious schedule, but we are up for the challenge.  Today, we focused on our tween’s primary goal of searching for ALL of the Harry Potter places in London, a set up for failure right out the gate. However, we did manage to find a fair number of filming locations.

Next week, we hope to expand our search to include Harry Potter Attractions in England and Scotland. This will include Hogwarts School of Witchcraft and Wizardry, the Hogwarts Express, and the Harry Potter Studio Tour.

Our first stop was platform 9 3/4. It’s at the Kings Cross station in London. If you are a Harry Potter fan, you know that only certain types can get onto the platform 9 3/4.  I, unfortunately, was not one of them, and could only capture the photo as my girls departed.

Pro Tip: Look for the sign on the wall or just the long queue of people waiting for a turn. Put something into the trolley (cart), and have your “student” simulate running for a more realistic image.  The magic will do the rest. 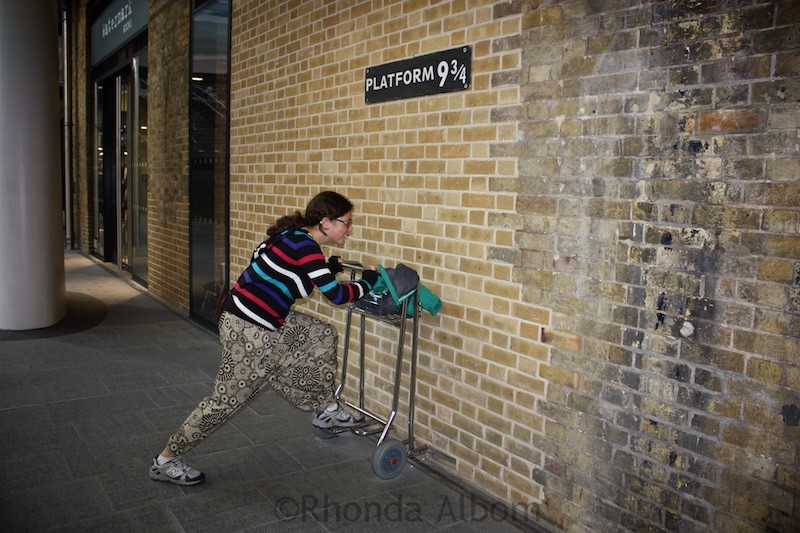 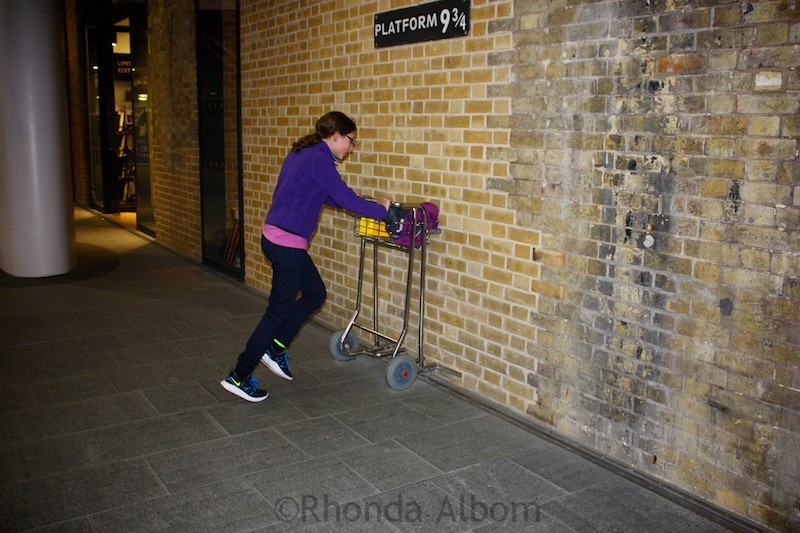 Connected to Kings Cross Station is the facade of St Pancras the Weasley’s car takes flight in the second movie.

We crossed the Millenium bridge from Shakespeare’s Globe Theatre to St. Paul’s Cathedral. You can see it here in the background, although you may know it as the Harry Potter Bridge.

• The neighbourhood around the Leaky Caldron

One of our London adventures took us in search of the streets used around the Leaky Caldron. It was marked by the two little martini glasses on a fairly useless map we had downloaded (I am not sharing it here.)  We thought we recognized one of the streets. As Sarah stopped to smile on a corner for a photo, a rather drunk man joined in the photo.  I told him what we were looking for and he assured us we were close, just one building off. . .

Harry Potter Attractions in England – Outside of London

• Hogwarts School of Witchcraft and Wizardry

While the model castle above was used in flying scenes, a real castle was needed for the actors. Alnwick Castle on the east coast of England in Northumberland was chosen, and many of the local teenagers were used as extras in the films.

Read Next: Walking through History: Alnwick Castle (Hogwarts) in England

Located in Oxford England, we had two pay £2 to enter the room in Oxford University’s Divinity School building as it doubled as a hospital in the infirmary scene in the first Harry Potter movie.

The “Hogwarts Express” is real, or at least it’s a real tourist attraction in the Scottish Highlands. The train runs from Fort Williams to the north and back. Unfortunately, I was too late. Our attempt to meet the train as it returned to Fort Williams Station at 4 pm failed, as it was Sunday, the day the train doesn’t run.  However, we asked, and were given directions to the train yard where we got to see the Hogwarts Express.

Pro Tip: Book early if you want to ride the Hogwarts Express, as soon as you know your dates. We were there outside of the high season, and it was booked over a month in advance.

For a Hogwarts fan, every moment of the Making of Harry Potter Studio Tour screamed amazing. Located just outside London, it’s a quite popular tourist attraction. The studio is split into three ‘rooms’ – inside props, outside props, and special effect props, respectively. We chose to pay a little more for the audio tour, and then off we went inside!

⇒ Book your tickets to the Harry Potter: Warner Brothers Studio Tour with bus from London

We have also toured the Warner Bros Studio in Los Angeles California where the sorting hat now lives.

Sorry, Diagon Alley is a set, rather than an actual destination in London that we can find. However, we did get an opportunity to walk down Diagon Alley on our tour of the Harry Potter Studio just outside of London.

Not Yet a Harry Potter Fan?

If none of this means anything to you, maybe you should check out

If you enjoyed this article, please share it on social media including adding this pin to Pinterest: 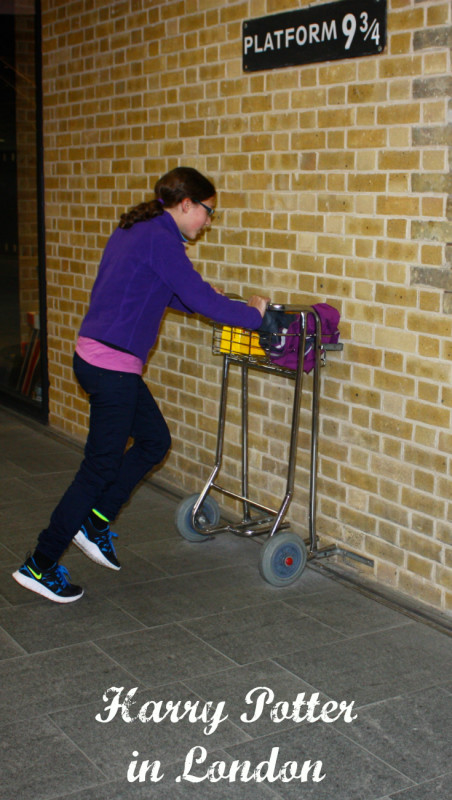 Have you seen any of the sights of Harry Potter in London?

See all our tips for the UK and Ireland here.

Unless otherwise noted, all photos on this page ©Rhonda Albom. All rights reserved.

This website uses cookies to improve your experience while you navigate through the website. Out of these, the cookies that are categorized as necessary are stored on your browser as they are essential for the working of basic functionalities of the website. We also use third-party cookies that help us analyze and understand how you use this website. These cookies will be stored in your browser only with your consent. You also have the option to opt-out of these cookies. But opting out of some of these cookies may affect your browsing experience.
Necessary Always Enabled
Necessary cookies are absolutely essential for the website to function properly. These cookies ensure basic functionalities and security features of the website, anonymously.
Functional
Functional cookies help to perform certain functionalities like sharing the content of the website on social media platforms, collect feedbacks, and other third-party features.
Performance
Performance cookies are used to understand and analyze the key performance indexes of the website which helps in delivering a better user experience for the visitors.
Analytics
Analytical cookies are used to understand how visitors interact with the website. These cookies help provide information on metrics the number of visitors, bounce rate, traffic source, etc.
Advertisement
Advertisement cookies are used to provide visitors with relevant ads and marketing campaigns. These cookies track visitors across websites and collect information to provide customized ads.
Others
Other uncategorized cookies are those that are being analyzed and have not been classified into a category as yet.
SAVE & ACCEPT
89 shares