Being an island, New Zealand has a long nautical history. From the arrival of the first Polynesian people through today, much of New Zealand life revolves around the sea, especially here in Auckland where it is said that one in four people have a boat. It is no surprise that Auckland’s nickname is the City of Sails.

The New Zealand Maritime Museum is the best place to discover New Zealand’s nautical history from the first people to arrive only 1,000 years ago in dugout canoes through modern blue water racing. It is one of my two favourite museums in Auckland (the other is the Auckland Museum). It takes us through the nation’s nautical history with actual boats, replicas, stories, interactive exhibits and more.

Blue water, Black Magic is a tribute to Sir Peter Blake, yachtsman, environmentalist and New Zealand hero. His life  was cut short by pirates in 2001. It also features maritime achievements that have resulted in New Zealand holding every significant blue-water sailing trophy in the world, at one point in time. Sir Peter Blake is New Zealand’s most celebrated sailor, and probably its most famous. He is joined in fame by some of New Zealand’s recent olympians and America’s Cup team members.

Sail on the Ted Ashby or the Breeze

The Ted Ashby is a ketch-rigged deck scow. The Auckland Maritime Museum offers daily sailings on the Ted Ashby as well as other boat options. Check out the sailing time schedule to help plan your visit.

The Breeze is a recreation of a brigantine style ship used in New Zealand coastal and inter-Dominion trades. While we have not yet sailed on it, we did get on the Breeze during a special event entitled “Dangerous Duties at Sea” held at the Maritime Museum.  The highlight for my teen was getting an opportunity to climb up the rigging on the Breeze. 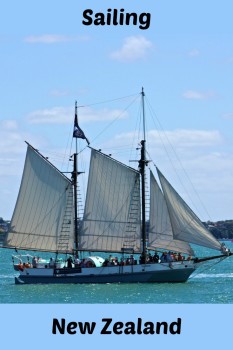 Are you fascinated by nautical history? Have you been to the Maritime Museum?

Quick Reference Links:
- Booking.com
- RentalCars.com
- Amazon.com
138shares
We use cookies to ensure that we give you the best experience on our website. If you continue to use this site we will assume that you are happy with it.OkRead more