Things to Do in Carcassonne’s Medieval Fortified City

You are here: Home / Travel / Europe / Western Europe / Things to Do in Carcassonne’s Medieval Fortified City 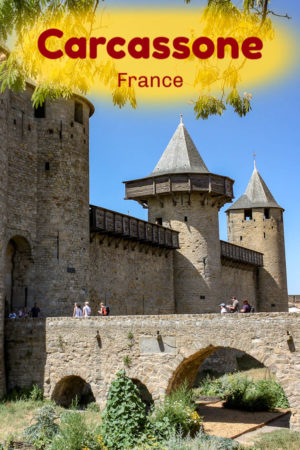 Despite the intense heat and massive summer crowds, Carcassonne remains one of my favourite French cities. Originally settled over 2500 years ago, it was a significant town in the Roman empire and again in the Middle Ages. Today, it remains the largest fortified city in Europe. The castle was expanded and double-walled ramparts were built in the 13th century. However, at some point later it was left to ruins and finally restored in the 19th century. Today, it is on the UNESCO World Heritage list. There are plenty of things to do in Carcassonne France.

The city wall is three kilometres long (1.9 miles) and has 52 towers. It is one of the most visited monuments in France. A visit to the old city including the castle is at the top of my list of things to do in Carcassonne.

A tour of the 12th-century count’s castle is the highlight of any visit to Carcassonne. Our audio guides offered fascinating insight, while at the same time guided us through the castle so we didn’t miss anything significant. The audio guides are available for a nominal fee in multiple languages including English. Their only downside is that they don’t allow us to ask questions, yet we would recommend them. However, the one thing I would do differently is to purchase a skip-the-line ticket in advance as the queue for an entry ticket was nearly an hour long when we arrived.

The Basilica of Saint Nazaire is a national monument well known for its 13th and 14th-century stained glass. It was built from materials blessed in 1096 by Pope Urban II and initial construction was completed in the 12th-century. It was reconstructed in its present gothic style in the late 13th century and became a basilica in 1898.

Other things to do in Carcassonne medieval city

After our castle visit, we wandered through the walled city, sweating and complaining of the heat. The Carcassonne temperature topped 41C (106 F). Unseasonably hot even for summer in southern France, it was well beyond our comfort level.

We would have done much better to have either a private guide or a group tour. Based of reviews, here are the options we would have taken. Note: The price for the group is per person, while the private guide is priced per group.

How did Carcassonne get its name?

Legend (and our audio guide) tells us that back in the 8th century, the town was under siege. The attackers thought by surrounding the castle and the walled city of Carcassonne, they would starve the inhabitants, therefore simplifying victory. Lady Carcas stuffed a pig carcass with grain and catapulted it over the wall at the enemy. When the invaders saw the fat pig, they assumed the people inside the walls had plenty of food. They retreated and Lady Carcas rang the city bells to celebrate. It was announced, “Carcas sonne!” (which means “Carcas sounds” or “Carcas rings the bell”).

Accommodation in Carcassonne (inside the walled city)

As we travelled in the height of the tourist season without prebooking, we had no options but to move on. However, with proper planning, we would have booked in one of these two Carcassonne hotels, both located inside the walled city:

Hotel de la Cité & Spa – Mgallery by Sofitel: This five-star medieval style chateau has outstanding customer reviews. The room decor, a mix of classic and Provencal-style, features comfortable beds and liveable space along with impressive views. Catering to everyone, they have a pool, wifi, spa, restaurant, and bar. The rooms options include classic, jr. suites, family, and pet-friendly options. ⇒ Click here for pricing and reviews for Hotel de la Cité & Spa

To our surprise, we found Carcassonne to be both an easy city to drive and to find car parking (it might have just been good luck). We had a car as part of our home exchange, as we agreed to swap vehicles as well as houses with a family in Spain. Had we not had our own vehicle, we would have done what we do in the rest of the world and hire a car through RentalCars.com. As a conglomerator, they present the available options, comparing local and international companies. Plus, they have English-speaking customer service.

Carcassonne was one of several delightful villages we visited as we drove from Lourdes to Béziers in the Pyrenees Mountains.

Will you visit Carcassonne? Did you know how it got its name?

Quick Reference Links:
- Booking.com
- RentalCars.com
- Amazon.com
486shares
We use cookies to ensure that we give you the best experience on our website. If you continue to use this site we will assume that you are happy with it.OkRead more