You are here: Home / Travel / Cruising / Cruise Ports / Highlights of Vancouver – Much More than a Port City

Highlights of Vancouver – Much More than a Port City

This is our second visit to lush, green Vancouver. It’s one of only a small handful of cities around the world that I would love to live in someday, even despite the colder winters. We arrived via cruise ship, disembarking after 18-nights and an adventure through the Panama Canal.

Planning ahead, we had reserved a spot on a free two-hour walking tour of Granville Street and Gastown from Tour Guys. We love free city tours as the guides work for tips, so tend to be excellent. Our guide was no exception, a former history major, he was enthusiastic and interesting.

British Columbia, being the last place discovered by the Europeans, is an eclectic mix of modern and First Nations culture. Here are some of the highlights he shared with us:

On day two we visited Capilano Suspension Bridge Park (photos coming soon) as well as Stanley Park. Located on a peninsula at the northwestern edge of downtown Vancouver,  we entered Stanley Park via Denman Street. Stanley Park covers 400-hectares of West Coast rainforest (along with manicured areas, a stone seawall for erosion protection, and amazing views). It attracts almost 8 million visitors each year.

Read next: 20 Picturesque Cruise Ship Ports Around the World

Have you been to Vancouver? What was your favourite thing to do here?

If you enjoyed this article, please share it on social media: 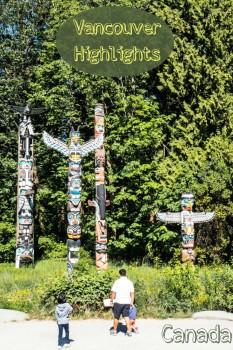 This website uses cookies to improve your experience while you navigate through the website. Out of these, the cookies that are categorized as necessary are stored on your browser as they are essential for the working of basic functionalities of the website. We also use third-party cookies that help us analyze and understand how you use this website. These cookies will be stored in your browser only with your consent. You also have the option to opt-out of these cookies. But opting out of some of these cookies may affect your browsing experience.
Necessary Always Enabled
Necessary cookies are absolutely essential for the website to function properly. These cookies ensure basic functionalities and security features of the website, anonymously.
Functional
Functional cookies help to perform certain functionalities like sharing the content of the website on social media platforms, collect feedbacks, and other third-party features.
Performance
Performance cookies are used to understand and analyze the key performance indexes of the website which helps in delivering a better user experience for the visitors.
Analytics
Analytical cookies are used to understand how visitors interact with the website. These cookies help provide information on metrics the number of visitors, bounce rate, traffic source, etc.
Advertisement
Advertisement cookies are used to provide visitors with relevant ads and marketing campaigns. These cookies track visitors across websites and collect information to provide customized ads.
Others
Other uncategorized cookies are those that are being analyzed and have not been classified into a category as yet.
SAVE & ACCEPT
276 shares