Grauman’s Chinese Theater (now called TLC Chinese Theater) is an icon in Hollywood. It is home to the courtyard where the stars are invited to leave hand and/or footprints. It’s where they are immortalized forever.  A tradition that has been going on since the 1920s,  it is a huge honour to be invited to leave a print. Nowadays the ceremonies are an event in their own right. None were going on when we were there. However, we had plenty of time to walk around and compare our hands and feet to the stars.

The cast of stars from Harry Potter. I can’t even imagine how large the crowds were on the day they were here to cast their hand and footprints. I know that today it was one of the more popular squares, with a small queue for a turn to have your photo with the stars. After spending time in England chasing down some of the Harry Potter filming sites, this didn’t surprise me at all.

The first handprints were of Norma Talmadge on opening day May 18, 1927. I was too star struck by the names I know to spend time looking for the first prints.

A message instead of footprints at Grauman’s Chinese Theater

Many of the older hand and footprints include personal notes to Sid Grauman. Others, like the one from the mayor, offer a more general congratulations, mentioning Mann, the owner at the time.

Believe it or not, New Zealand has their own celebrity walk, complete with hand and footprints of New Zealand heroes and superstars like Sir Edmund Hilary, Peter Blake, and Rachel Hunter. It’s located in Auckland.

The sidewalk of the stars on Hollywood Blvd

I will admit, Grauman’s Chinese Theater is one of those completely touristy places, yet I just had to visit. Located on Hollywood Blvd, it’s an area filled with tourists, a camera in every hand. If Grauman’s Chinese Theater isn’t enough, just outside the theatre, along Hollywood Blvd is the sidewalk of the stars, another opportunity to look for some of our favourite names. 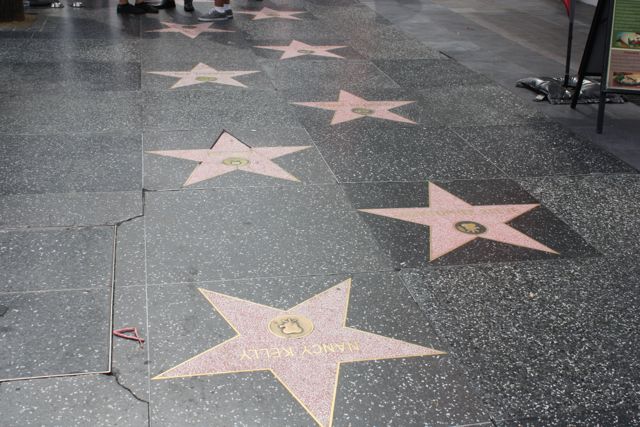 There is a similar, although a much smaller version of the Sidewalk of Stars in Nashville, across the street from the County Music hall of fame.

It is primarily a movie theater. And in 2013, TLC merged with IMAX creating one of the largest movie screens in North America, in a theatre that holds 932 people. Both the star walk and concrete slabs with footprints and handprints remain, despite the new owners.

Sometimes, my family makes a bit of fun of me for being so star struck, but I will be the first to admit, I had a great day.

Have you been to Grauman’s Chinese Theater? Which hand and footprints will you look for first?