Fun Things to Do in Prague Czech Republic

You are here: Home / Travel / Europe / Eastern Europe / Fun Things to Do in Prague Czech Republic

Prague, the capital city of the Czech Republic is a mix of old world charm, intricate architecture and innovation. It’s a city I wish we had more time to explore, as there are so many traditional and fun things to do in Prague.

From the first moment, I liked Prague. It is easy to explore and it’s an affordable city (as long as you don’t drive in the pedestrian areas – more on this below).

Fun Things to Do in Prague

• Watch the animation on the world’s oldest working astronomical clock

At the stroke of nearly every hour crowds stand in wonderment in Prague’s Old Town Square. They are looking up at the third-oldest astronomical clock in the world, and the oldest one still in operation. Specifically, on the hour (between 9 am and 11 pm) the attraction is the procession of the 12 apostles near the top of the clock. It is one of the top things to see in Prague.

Installation of the Prague astronomical clock was in 1410. The lower dial has one day for each day of the year.

The historic Charles Bridge is one of Prague’s top attractions. Filled with statues and offering beautiful views, it crosses the Vltava river.  Bridge construction began in 1357. It was a long process, with many delays. It wasn’t until the beginning of the 15th century that it was finally completed.

• Wait for your turn on the world’s narrowest pedestrian road

Whether or not this is acually the world’s narrowest pedestrian street is up for debate. However, it is so narrow that it requires a pedestrian traffic light as two people cannot pass.

• Learn why Prague has such an extensive Jewish quarter

Prague’s Jewish Quarter is one of the oldest in Europe, and the museums are filled with artifacts that no longer exist in other towns.

With so much history, we opted for a tour of the Jewish Quarter. It was a good choice. We also got lucky as no one else showed up for our group tour, so it became private.

The National Museum is one of the best museums in Prague. Here we learned a bit of interesting Prague history and discovered a vast number of important things that were invented or researched by Czech scientists. Some of the more interesting items were the first classification of blood types by Jan Jánský, the boat screw propeller by Josef Ressel and František Burián who gave birth to the field of plastic surgery. Not to mention the work by Karel Raška in eradicating smallpox.

• Marvel at one of the world’s most beautiful churches: St. James the Greater

The church of St James the Greater, also called the St James Cathedral is considered by many to be one of the most beautiful Catholic churches in the world.

Near the entrance to the  St. James Cathedral hangs a severed hand from the 14th century. The legend tells of a thief who got caught around the wrist by the Madonna as the thief tried to steal jewels from the high altar. The thief was stuck. Cutting off his arm was the only way to free him. The monks hung the severed hand as a warning for other thieves.

• Spend time at the Prague Castle

We opted for a guided tour of the Prague Castle and it brought history to life. Aside from the castle itself, there is a large cathedral on the grounds, as well as a fascinating weapons room, and a frightening torture chamber. The Prague Castle should be a must-see on any list. It’s one of the most fun things to do in Prague.

• Take a tour of Prague

• Enjoy the architecture on Wenceslas Square

Standing in front of the National Museum, we had a lovely view of Wenceslas Square.

• Eat from a street vendor

We are generally brave eaters and try to eat what locals eat. This particular street vendor always seemed to be busy with customers. We took the hint, and enjoyed the sausages.

• Enjoy lunch at an outdoor cafe

Prague has so many adorable restaurants. We were glad our Lonely Planet guidebook made a recommendation.

Believe it or not, this is the first time we had seen garra rufa fish. Apparently, they eat dead human skin, and Melissa gave it a try. Twenty-five minutes later she had incredibly soft feet.

We learned very quickly that Prague police will take cash payouts. Our story:

We have rented an apartment on Wenceslas Square. Having just driven in from Germany and have no koruna, the currency of the Czech Republic. Our GPS sent us down a one-way street that ends on Wenceslas Square’s main road. A simple right turn will land us in front of our short term rental. However, the street was closed to traffic yet turning was the only option.

Paraphrasing the officer, “Are you aware that this morning we decided to make Wenceslas Square a pedestrian-only road just for today and only until 6 pm.” He continues, “The fine for driving on a pedestrian road is 2,000 Koruna” (equals $120NZD or $100USD), but if you pay us 200 koruna in cash right now, that will cover it.”

When hubby confessed to only having Euros, the officer pointed out the ATM.

Practical Travel Tips for When You Visit Prague

Which of these fun things to do in Prague will you do first? 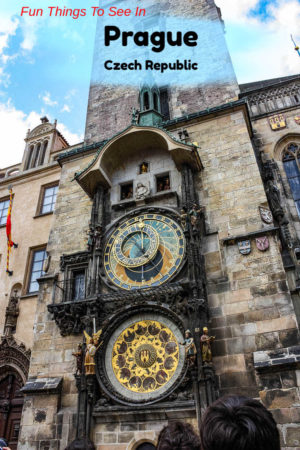 Quick Reference Links:
- Booking.com
- RentalCars.com
- Amazon.com
204shares
We use cookies to ensure that we give you the best experience on our website. If you continue to use this site we will assume that you are happy with it.OkRead more