Bangkok Itinerary: Things to Do in Bangkok in 3 Days

You are here: Home / Travel / Asia and Africa / Asia (China and South East Asia) / Bangkok Itinerary: Things to Do in Bangkok in 3 Days 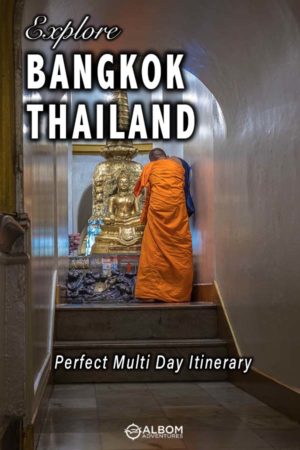 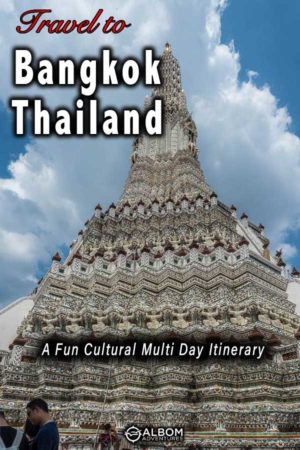 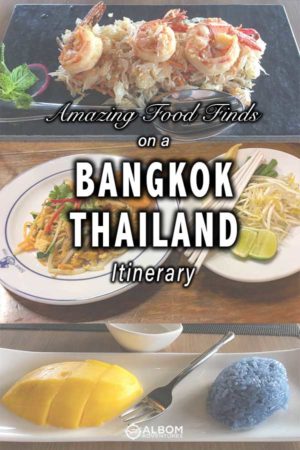 Bangkok Thailand is a visual masterpiece of golden temples, intricate architecture, and natural beauty encapsulated by tempting aromas, friendly people, and shockingly hot and humid temperatures. We instantly fell in love with a city that seamlessly mixes modern life and ancient cultures. Here, we share our recommended Bangkok itinerary for first-timers; it’s a selective list of things to do in Bangkok in 3 days.

The opportunities seem endless, ranging from cultural to gastronomic excellence. Intricate temples and shopping by day, the city has a colourful nightlife as well. Here are our top 10 things to do in Bangkok in 3 days.

The official residence of Thailand’s kings from 1782 to 1925 is now the top tourist attraction in Bangkok, drawing 10,000+ visitors daily. A masterpiece around every corner, it is a place not to miss, despite having to share the experience with massive crowds.

The Emerald Buddha Temple is located within the palace grounds (More on the Grand Palace coming soon).

Pro Tip: The strictly-enforced dress code includes covered shoulders and knees. It is easy to purchase a wrap outside the palace from one of the many touts.

The Temple of Dawn was intentionally built with steep steps to remind us of the difficulty to reach Buddha in heaven. In the interest of safety, visitors can only go as high as the second level. From here, we get a fabulous view of the Grand Palace across the river.

Inside the temple are relics of the Buddha, but visitors are not permitted to enter.

Getting to the Temple of Dawn

A short walk from the Grand Palace brought us to a ferry to cross the Chao Phraya River to the Temple of Dawn. The ferry costs 4 baht ($0.33 USD), takes about 10 minutes, and is definitely part of the adventure. I was luckier than Jeff and got a seat in both directions. The secret to getting a seat is to be either a woman or a monk.

As we entered the temple of the Reclining Buddha, a hypnotic calm passed over us, accelerated by a fairly regular clanking. Even reclined, the 46-metre buddha barely fits inside the temple and is the third-largest Buddha in Thailand. Buddha’s feet are each 5 metres long and inlaid with mother-of-pearl.

Like the Grand Palace, there is a dress code in place requiring visitors to cover knees and shoulders and, in this case, to remove shoes.

Wat Pho is one of the city’s largest temple complexes and worth spending a bit of time exploring. There are over 300 different Buddha here. Visitors are welcome to participate/observe an hour of chanting that begins at 5 pm in the Ordination Hall.

Getting to Wat Pho

Wat Pho is also a short walk from the Grand Palace, in the same direction as we walked to the ferry entrance. It can be inserted into your Bangkok itinerary either before or after the Tempe of Dawn.

Although it is fairly easy to walk between the three sites above (Grand Palace, Wat Pho, Wat Arun), we were grateful to have a guide for the added value. While each of the three exquisite sites is captivating on its own, the history really brings them alive.

Based on reviews, we are impressed by both the comprehensiveness and flexibility of this walking temple tour that offers combinations of the three main temples above and includes the entrance fees. We, of course, recommend visiting all three.
⇒ Check price and reviews: Flexi Walking Temple Tour: Grand Palace, Wat Pho, Wat Arun

Wat Pho is also home to Thailand’s first public university. Over time, the school’s focus on religion, literature, and science transitioned to a top-rated traditional medicine and Thai massage school.

Our one-hour Thai foot massage was more therapeutic than relaxing, and we walked away feeling great. It included our legs and ended with about 10 minutes focused on our shoulders. Be warned, traditional Thai massage isn’t a gentle rubbing, but rather an invigorating experience.

Pro Tip: Advance booking is not available. Therefore, if you want a massage, it’s best to get on the list as your first stop at Wat Pho.

Our climb up the 344 steps to the top of the Golden Mountain (often called “Golden Mount”) seemed fairly easy, even in the sweltering heat. Timing it right, our reward was a beautiful sunset over the city.

Normally a daytime destination, Ancient Siam steps us back in time. Self-proclaimed as one of the world’s largest outdoor museums, Ancient Siam displays detailed replicas of various Thai historical structures across its 200+ acre site.

Ancient Siam is not normally open at night. However, we were invited to a special evening celebration, complete with entertainment and a simulated Loy Krathong Festival. (We visited about 2 weeks before Loy Krathong, a festival that falls in November). As part of the tradition, we each released a lotus-shaped raft with a candle to pay respect to the goddess of water.

8. Chinatown and other things to do in Bangkok at night

The place by day to buy electronics, clothing, or gold, Chinatown comes alive with food stalls at night. Wafts of unfamiliar aromas tempted us while the ever-changing bright lights were almost dizzying. As we made our way through thick crowds, our guide targeted her favourite evening dinner spot.

Getting to Chinatown via Tuk-Tuk

We travelled to Chinatown via Tuk-Tuk, a three-wheeled motorized travel option that is notorious for ripping off tourists. And, worse than overpaying, the ride itself isn’t very comfortable. Knees are higher than hips throughout the bouncy ride. However, we did get a fun photo.

While negotiating with the Tuk-Tuk driver, our guide arranged for stops at several lit-up monuments and temples.

A city that never sleeps, there is also a seedy side to Bangkok (made famous in movies like Hangover 2); however, we avoided it.

If you are set on the full Thai tourist experience that includes a Tuk-Tuk ride, a pre-organized tour might be the perfect solution. Remember, traffic in Bangkok is appalling, especially during the daytime, so choosing an evening tour will give you more for your money.

Our top pick, based on sights and reviews, will take you to some of the older districts, see some of the stunning monuments and temples lit up at night, and stop at Wat Pho (exterior only), night markets, and the flower market. A four-hour tour, it includes a mix of walking and transport in a Tuk-Tuk, a variety of foods to sample, and a knowledgeable English-speaking guide.
⇒ Check price and reviews for this Night Tuk Tuk Tour: Markets, Temples & Food

Heading off the beaten path, we love to explore the less-touristy sites, like the undeveloped jungle-like area of Bang Krachao, commonly called Bangkok’s green lung. We shared walkways along the canals with bicycles and motorbikes.

We also visited an old temple, a tie-dye and incense workshop, and a floating weekend market. More on Bang Krachao coming soon.

While most visitors arrive via ferry from Klong Toey, we were driven over the bridge in a private vehicle. Bikes are available for hire at the dock or join into this top-rated half-day bicycle tour.
⇒ Check price and reviews for this Jungle Bike Tour

Strolling through an air-conditioned Bangkok shopping mall, we joined thousands of locals and visitors escaping the heat. We found ourselves surrounded by a mix of retailers we recognized and a smattering of new ones.

While we find shopping malls around the world to be too similar to get the cultural experience we desire, visiting at least one seems to be a must-do in Bangkok. Here are a few recommended to us:

Other places to visit in Bangkok

With only 3 days in Bangkok, we didn’t allocate time to visit any of the city’s museums or animal attractions, although it sure is filled with some unusual options. Most indoor attractions are air-conditioned, thus offering an escape from the heat.

Where to eat in Bangkok

No discussion of Thailand’s capital could be complete without mention of some of the fabulous food options available. Our top recommendations:

This is the place to eat Pad Thai in Bangkok, as evidenced by the massive queue of people waiting for entry. It moved quickly. Despite being halfway down the street, we were seated in about 30 minutes, and eating the best Pad Thai ever (and it easily met my dietary requirements). If you only have time for one meal, Thipsamai should be it.

Right next to Thipsamai, another massive queue waits for Michelin Star wok-cooked seafood dishes, prepared by owner Supinya Junsuta, whose nickname is Raan Jay Fai. She is well-known for wearing goggles while she cooks.

Mango Tree along the Yodpiman Riverwalk

After visiting the Temple of Dawn, we took the return ferry back to our starting point where we strolled the Yodpiman Riverwalk, discovering restaurants and cafes ranging from authentic Thai cuisine to Starbucks. Our guide chose well, and we enjoyed a feast of pomelo and shrimp (mild), red chicken curry (spicy), and blue sticky rice with mango at the Mango Tree Restaurant.

Eating dairy-free and gluten-free in Bangkok is easy

Even with food allergies, I had no problems onshore (only the ship messed up my food allergies). I simply typed a list of my dietary restrictions into Google translate and showed it to the restaurant owners and street food vendors. Seeming more concerned with my health than their bottom line, food servers simply pointed and shook their head either yes or no.

How to get around the city

One popular way to see highlights of any major city is with a hop-on, hop-off tour. However, in Bangkok, heavy traffic and difficult to find stops make for less than stellar reviews of the bus options. Fortunately, there is also a hop-on, hop-off boat that gets much better reviews.

Read Next: Bangkok Travel Tips for First-Time Visitors to Thailand

Which of these Bangkok itinerary ideas appeal to you? 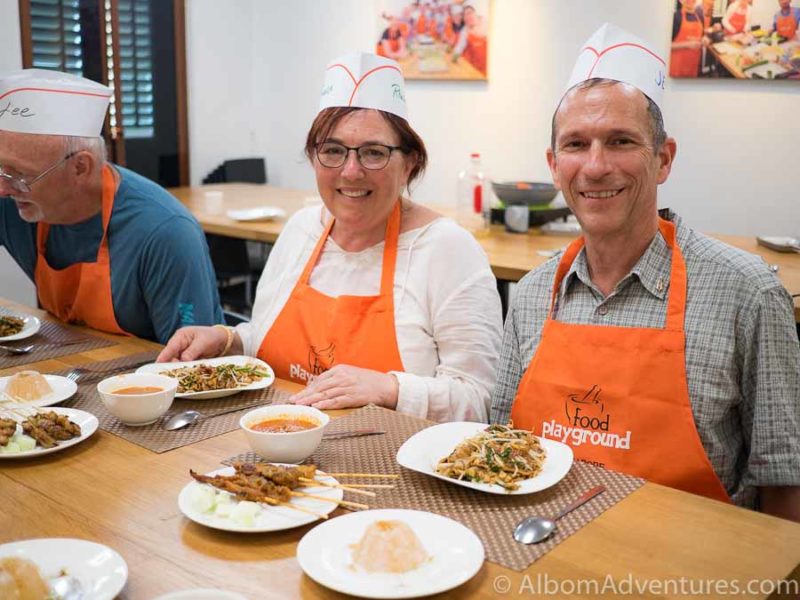 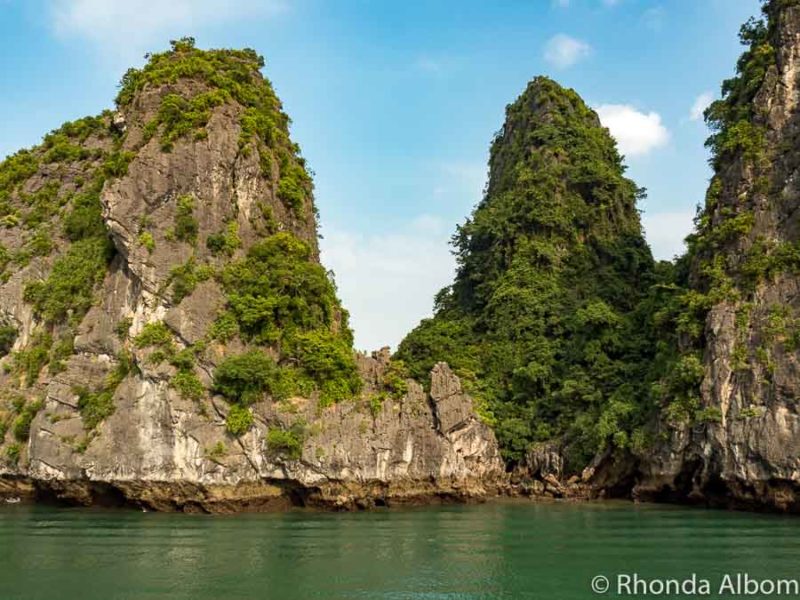 How to Choose Your Perfect Halong Bay Cruise 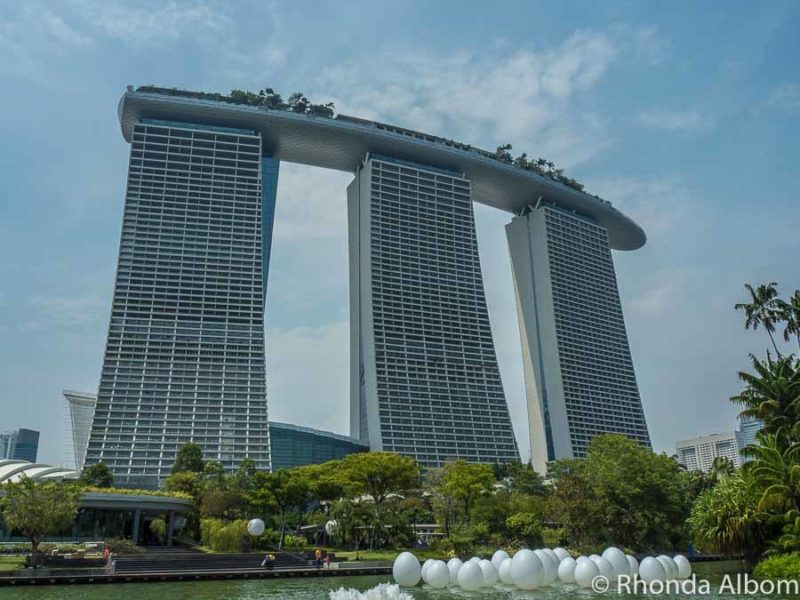 Marina Bay Sands Review: Is It Worth the High Price?

Disclaimer: We were guests of the Tourism Authority of Thailand on two of our three days to aid in the writing of Albom Adventures. We travelled via cruise ship which served as our local accommodation. We paid our full cruise passage. The opinions expressed here are strictly our own.

Quick Reference Links:
- Booking.com
- RentalCars.com
- Amazon.com
324shares
We use cookies to ensure that we give you the best experience on our website. If you continue to use this site we will assume that you are happy with it.OkRead more