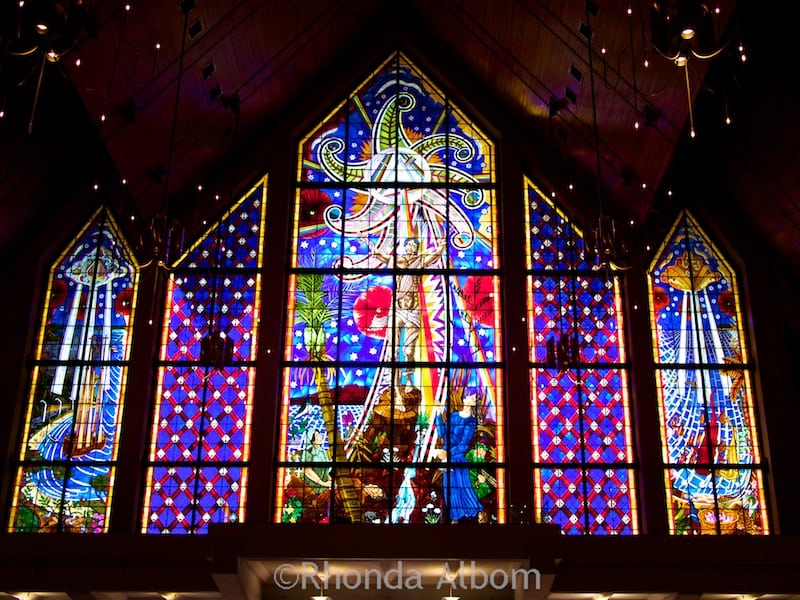 In the heart of Parnell, Auckland’s oldest neighbourhood sits an unassuming cathedral. I have passed by Holy Trinity Cathedral many times, without giving it much thought. That was before I learned that its overall design has been described as the world’s only example of the “Pacific Gothic” architectural style.

We are quite spoilt, having travelled through Europe being overwhelmed by spectacular old cathedrals like Santiago de Compostela, Mezquita in Cordoba, Westminster Abbey in London, and St Basil’s Cathedral in Moscow. The modern cathedrals didn’t stick into my mind until I entered the Holy Trinity Cathedral in Parnell (Auckland, New Zealand).

For just a few seconds I stood, staring. Modern stained glass windows lining the Nave’s walls to my left tell the Christian story with both traditional and Polynesian designs and stand in sharp contrast to the neo-Gothic archways in the Chancel to my right.

There was more, the acoustics were perfect and we happened upon a choir rehearsal. I could have listened forever, the melodic tones echoed off the walls and the passion of the voices invited us in.

It took a minute, but I soon realized someone was speaking to us. And to my surprise, rather than being asked to leave, we were welcomed and given permission to take photographs. Here are my favourites.

We headed back outside just a bit too late to enter the old Saint Mary’s which had been moved here in 1982 to become part of the Holy Trinity Cathedral complex.  It was built in 1886 as a parish church and as the pro-cathedral for the Anglican Diocese of Auckland.

If you enjoyed this article on Holy Trinity Cathedral, save it for later on Pinterest:

Want more on Auckland and the rest of New Zealand?

Have you visited the Holy Trinity Cathedral in Auckland? Do you prefer modern or traditional cathedrals?

Quick Reference Links:
- Booking.com
- RentalCars.com
- Amazon.com
146shares
We use cookies to ensure that we give you the best experience on our website. If you continue to use this site we will assume that you are happy with it.OkRead more