I couldn’t spend time in my favourite city without snapping a few classic San Francisco images. A coastal city built on the hills, there are plenty of interesting sites and unusual things to do in San Francisco.

The most iconic San Francisco images include the Golden Gate Bridge. Connecting the city to Marin County to the North, the bridge was once the world’s longest suspension bridge (until 1964). Construction on the bridge took four years and began in 1933, during the Great Depression. The US Navy had wanted to paint it black with yellow stripes. Personally, I am glad it is “international orange”.

Sitting in the middle of the bay, Alcatraz Island prison gave it’s prisoners a view of freedom out its windows. Now it is a National Recreation Area. It was once “home” to Al Capone and George “Machine-Gun” Kelly.

I think it is the cable car that comes to mind first when people think of classic San Francisco images.

Locals and tourists flock to Beuna Vista cafe for one of their famous Irish Coffees.

One of my personal favourite spots in San Francisco, the Palace of Fine Arts was built for the San Franciso’s Panama-Pacific Exposition in 1915. It exhibited works of art. It was rebuilt in 1965 and retrofitted in 2009. Visiting here is often thought of as one of the romantic things to do in San Francisco.

The Dragon Gate welcomes tourists to Chinatown along Grant Ave (at the intersection with Bush Street). While filled with shops, they tend to attract tourists. Locals wanting Chinese goods tend to do their everyday shopping one block to the west on Stockton Street.

The Transamerica Pyramid Building (white) is the tallest building in San Francisco. The green building in the foreground is the Sentinel Building, home to American Zoetrope – the film studio founded by Francis Ford Coppola and George Lucas.

Certainly one of the more unusual things to do in San Francisco, we stared up at these 12-foot faceless, hollow statues on the 23rd floor in the city’s financial district. There are 12 of them in total. Locals walk by daily without giving them so much as a glance.

Standing much longer than the Golden Gate Bridge, the San Francisco–Oakland Bay Bridge is not nearly as well known. In fact, a visit here would be considered amongst the non-touristy things to do in San Francisco. The bridge crosses the San Francisco Bay heading towards Oakland. A section of this bridge collapsed during the earthquake of 1989.

Coit Tower on Telegraph Hill is named for Lillie Hitchcock Coit. She left a substantial bequest “for the purpose of adding to the beauty of the city I have always loved.”

The world-famous San Francisco Fisherman’s Wharf is still popular with tourists and locals. It’s also home to Boudin’s Sour Dough bread, a personal favourite of mine.

The Cannery is now a mall with several eateries. It was originally built in 1907 (after the big earthquake) by Del Monte as the world’s largest fruit-canning plant.

Getting to the classic sites of San Franciso

I know we missed a few, like Lombard Street and the Painted Ladies. But overall, I think we saw a good collection of the classics.

Everyone has their favourite spot in San Franciso. Most are one of the classic San Francisco images above. Mine is this “Speak no evil, see no evil, hear no evil monkey bench:”

Where to stay in San Franciso

We stayed at The Sir Francis Drake Hotel, a Kimpton property with a secret prohibition room. Getting up into it is definitely one of the unusual things to do in San Fransico.  If you want to stay in the perfect spot, check for deals and low prices at booking.com. 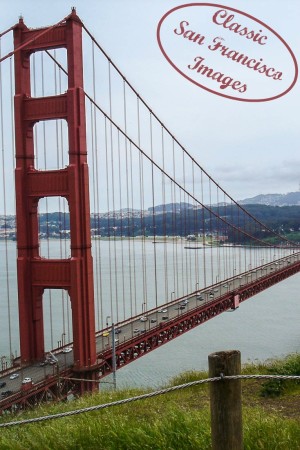 San Francisco is one of my favourite USA destination cities.

Did I capture your favourite classic San Francisco images?

This website uses cookies to improve your experience while you navigate through the website. Out of these, the cookies that are categorized as necessary are stored on your browser as they are essential for the working of basic functionalities of the website. We also use third-party cookies that help us analyze and understand how you use this website. These cookies will be stored in your browser only with your consent. You also have the option to opt-out of these cookies. But opting out of some of these cookies may affect your browsing experience.
Necessary Always Enabled
Necessary cookies are absolutely essential for the website to function properly. These cookies ensure basic functionalities and security features of the website, anonymously.
Functional
Functional cookies help to perform certain functionalities like sharing the content of the website on social media platforms, collect feedbacks, and other third-party features.
Performance
Performance cookies are used to understand and analyze the key performance indexes of the website which helps in delivering a better user experience for the visitors.
Analytics
Analytical cookies are used to understand how visitors interact with the website. These cookies help provide information on metrics the number of visitors, bounce rate, traffic source, etc.
Advertisement
Advertisement cookies are used to provide visitors with relevant ads and marketing campaigns. These cookies track visitors across websites and collect information to provide customized ads.
Others
Other uncategorized cookies are those that are being analyzed and have not been classified into a category as yet.
SAVE & ACCEPT
329 shares