If you dig deep enough, I imagine every hotel has a story to tell; however, few are as intriguing as San Francisco’s Sir Francis Drake. Centrally located on the cable car line in Union Square, it was the ideal place to stay today, but even more so during prohibition.

Passing through the doors, the Sir Francis Drake Hotel captivated my imagination. It’s a classic.

A valet escorts us to our room. As we enter the elevator bay, not a word is spoken of the secret prohibition room that is situated right over our heads.

Bullet Holes in the Ceiling of the Sir Francis Drake Hotel

It’s only later that we are told about the bullets still embedded in the upper lobby ceiling following a late 1920s wedding. “Was it a shotgun wedding?” I had to know. It turns out it wasn’t nearly that interesting. Rather an excited and happy father celebrating the marriage of his daughter during a strange era that revolved around organised crime and hidden alcohol.

The Secret Prohibition Room in the Sir Francis Drake Hotel

Finally, it was a slow hour, and time for our private tour of the purpose-built prohibition room that isn’t found on any blueprints of the hotel. Constructed in 1928, the Sir Francis Drake is the only San Francisco hotel built during prohibition, and its owners recognised the opportunity.

Using a hidden keyhole on the original 1928 elevator, our guide took us up (effectively taking that elevator out of service for a bit). As we entered the prohibition room, he set the mood with an old record player and “speakeasy-style” music from the era. He explained the process that brought booze from Canada via bootleggers to the Moss Beach Distillery.

Using the same elevator that we had just been in, it was brought up and stored in this room. A few of the current lobby sprinklers cover the old peepholes that allowed the bellman to keep watch.

The bellman also delivered the booze through small hollow doors that open on both sides, in the same manner as room service orders or dry-cleaning was sent up.

Our Room in the Sir Francis Drake Hotel

In case you are wondering, we loved our stay at the Sir Francis Drake. Our room was tastefully decorated and overlooked Union Square. We were located on an allergy-free floor, although like all Kimpton properties it is a pet-friendly location. We had a Grand Guestroom, and in similar fashion to the Kimpton properties we stayed at in Seattle and Portland, there was a bathrobe and yoga mat in the closet, interesting items in the mini bar, a fabulous hour-long wine reception at 5 pm nightly, a gym, and staff that treat everyone like they are special. The only downside was our bathroom that lacked a place outside of the shower to hang a towel, and barely had a counter large enough for our toothbrush.

Have you stayed at the Sir Francis Drake Hotel? Did you know there was a secret prohibition room? Have you had your photo taken with Tom Sweeney?

If you enjoyed this article, please share on social media, or pin it: 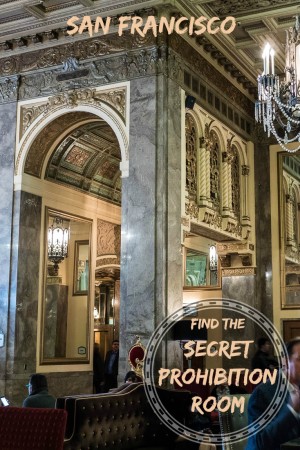 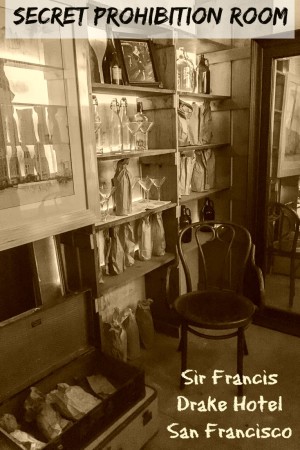 Disclaimer: As media guests of the hotel we were provided with a few extra benefits. However, the opinions expressed here are strictly my own.

This website uses cookies to improve your experience while you navigate through the website. Out of these, the cookies that are categorized as necessary are stored on your browser as they are essential for the working of basic functionalities of the website. We also use third-party cookies that help us analyze and understand how you use this website. These cookies will be stored in your browser only with your consent. You also have the option to opt-out of these cookies. But opting out of some of these cookies may affect your browsing experience.
Necessary Always Enabled
Necessary cookies are absolutely essential for the website to function properly. These cookies ensure basic functionalities and security features of the website, anonymously.
Functional
Functional cookies help to perform certain functionalities like sharing the content of the website on social media platforms, collect feedbacks, and other third-party features.
Performance
Performance cookies are used to understand and analyze the key performance indexes of the website which helps in delivering a better user experience for the visitors.
Analytics
Analytical cookies are used to understand how visitors interact with the website. These cookies help provide information on metrics the number of visitors, bounce rate, traffic source, etc.
Advertisement
Advertisement cookies are used to provide visitors with relevant ads and marketing campaigns. These cookies track visitors across websites and collect information to provide customized ads.
Others
Other uncategorized cookies are those that are being analyzed and have not been classified into a category as yet.
SAVE & ACCEPT
607 shares