You are here: Home / Travel / Americas / North America / Shoot a Machine Gun and Get Alien Gas from Uranus in Arizona

Where else but in the United States would you see a billboard reading “Shoot a Machine Gun.” Honestly, even while driving through the Arizona desert, this sign caught me off guard. Continuing our drive to Las Vegas, and with little effort on our part, we came upon it, complimented with Uranus Gas.

It felt like it was market, as some kind of bizarre alien encounter, a cross between the macabre and an overpriced tacky tourist attraction. First, there was this:

Then this “Shoot a Machine Gun.” 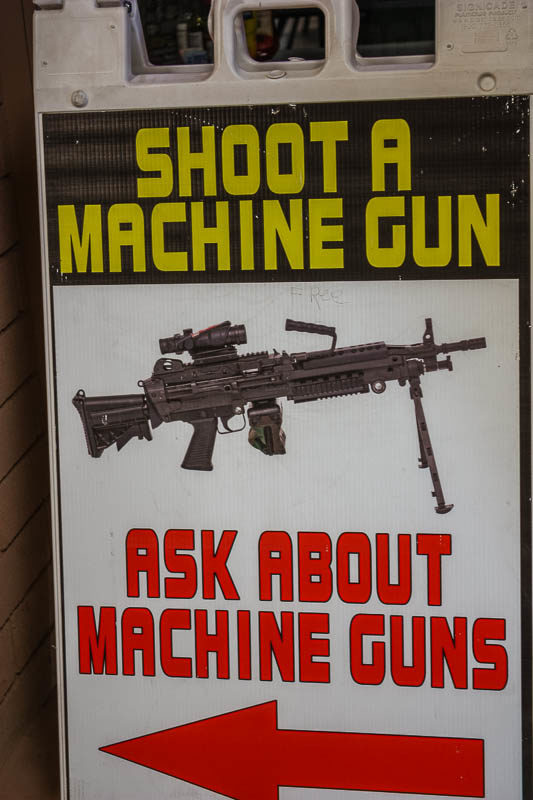 The story from the beginning: Being that we no longer live in America, this was not an opportunity that was going to come around often, so I thought. Look at all the other places one can shoot a machine gun:

I asked hubby if I could give it a try.  He questioned my motivation and pointed out that it didn’t say “Shoot a Real Machine Gun for Free.”

I was ready to pay up to $20 but really couldn’t justify anymore as I wasn’t sure why it sounded interesting, nor do I want to support this kind of tourist activity. As we entered the town of White Hills, Arizona we rounded a bend and came upon Uranus Gas and Bullets and Burgers. 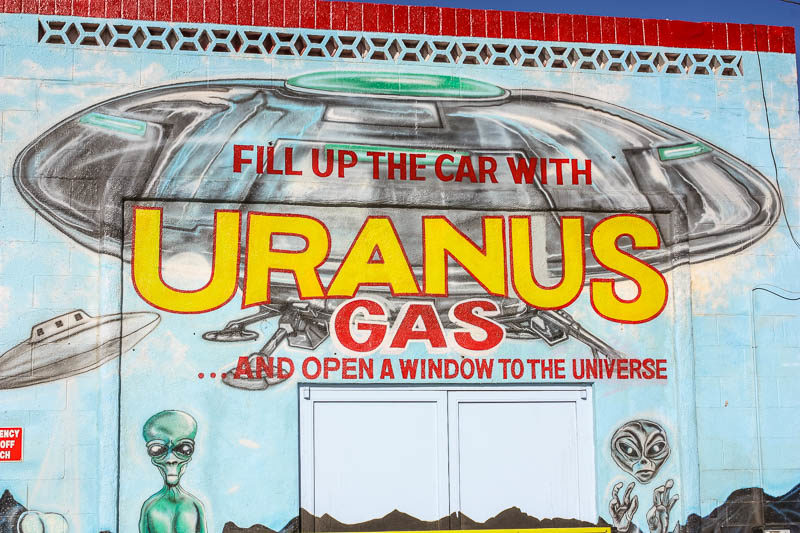 We generally never drive by the unusual without at least a bit of exploration, and what could be more out of the ordinary than an alien based petrol station called Uranus Gas which offered the opportunity to shoot a real machine gun? Besides, we had been driving for quite a while by this time and welcomed any facility stop.

We were not surprised to find it fairly crowded as it was the only cafe or restrooms for miles, Uranus Gas is built to attract attention, and there was at least one tour bus in the lot most likely travelling from Las Vegas.

I was surprised to find a Zoltar, as I thought it had been fabricated for the movie Tom Hanks movie Big. 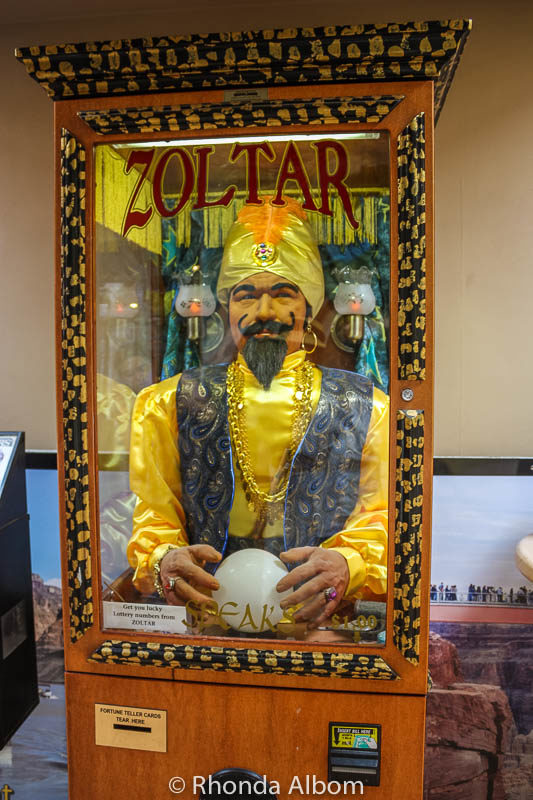 We were required to make a purchase in order to use the toilets. Rather than going for the advertised “All American World famous burger,” we choose ice cream. Then we headed over to the range, only to find the prices starting over $100 and building up to the $999 for the “Ultimate American Adventure” which actually started in Las Vegas with a helicopter ride viewing the Grand Canyon, shooting 4 different weapons, the famous burger and a Harley Ride.

It’s not the America I remember living in, but I didn’t live in the Southwest.

As the camouflaged owner began to tell me my options, I stopped him to say it was out of my price range and all I really wanted was a photo of myself holding the machine gun for my blog.

“No problem, you can do that.  Which one do you want to hold?”

Well, that was easy, and quite surprising after seeing the prices. Then he proudly offered me his latest acquisition, the actual M60 that Rambo (Sylvester Stallone) was holding in Rambo – First Blood Part 2 as he walked out of the swamp.  I got a similar photo of my daughter with the same weapon.  We each tried to put on our serious face, clearly, she looks better doing this. 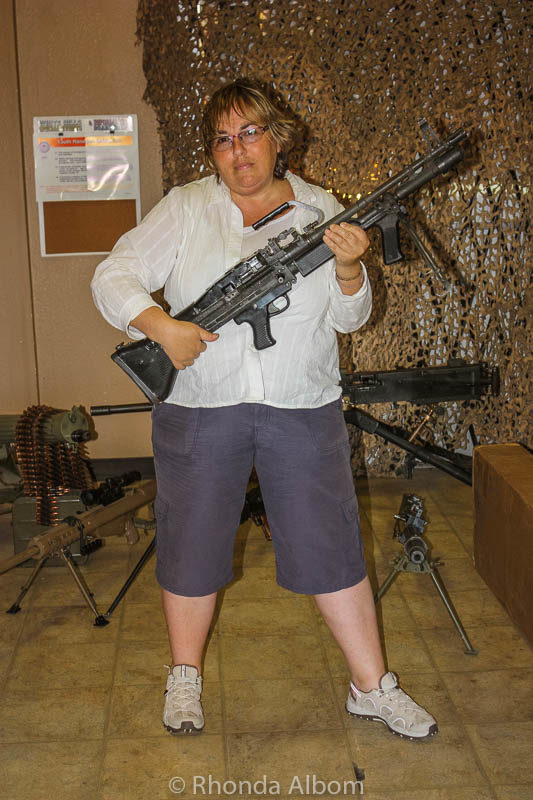 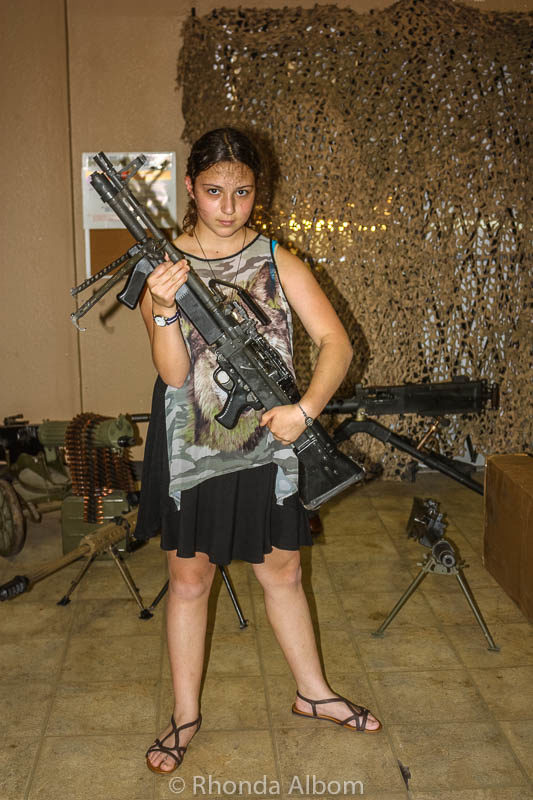 If that’s not enough silliness for you, they also had a long row of those photo opportunities where only your face shows through a hole of a painted illustration.  Here is our favourite: 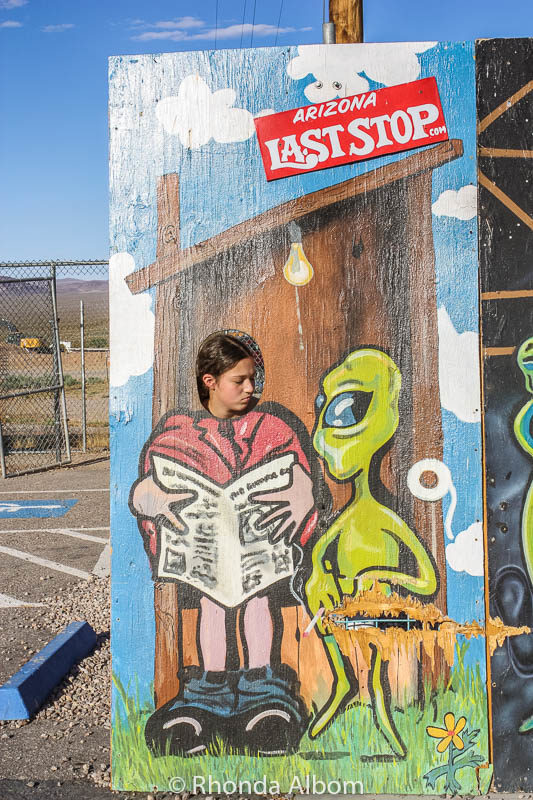 If you are driving through the Arizona desert on Hwy 93 (heading towards or away from Hoover Dam) be sure to allocate time for this unique bit of America.

Would you shoot a machine gun if you had an opportunity? Have you ever had gas from Uranus? Did you know Zoltar was real?

This website uses cookies to improve your experience while you navigate through the website. Out of these, the cookies that are categorized as necessary are stored on your browser as they are essential for the working of basic functionalities of the website. We also use third-party cookies that help us analyze and understand how you use this website. These cookies will be stored in your browser only with your consent. You also have the option to opt-out of these cookies. But opting out of some of these cookies may affect your browsing experience.
Necessary Always Enabled
Necessary cookies are absolutely essential for the website to function properly. These cookies ensure basic functionalities and security features of the website, anonymously.
Functional
Functional cookies help to perform certain functionalities like sharing the content of the website on social media platforms, collect feedbacks, and other third-party features.
Performance
Performance cookies are used to understand and analyze the key performance indexes of the website which helps in delivering a better user experience for the visitors.
Analytics
Analytical cookies are used to understand how visitors interact with the website. These cookies help provide information on metrics the number of visitors, bounce rate, traffic source, etc.
Advertisement
Advertisement cookies are used to provide visitors with relevant ads and marketing campaigns. These cookies track visitors across websites and collect information to provide customized ads.
Others
Other uncategorized cookies are those that are being analyzed and have not been classified into a category as yet.
SAVE & ACCEPT
90 shares